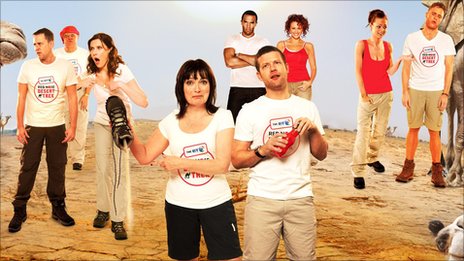 Celebrities including Lorraine Kelly and Dermot O’Leary are to trek across the Kaisut Desert, in north Kenya, for Comic Relief.

The pair, along with Strictly Come Dancing winner Kara Tointon, singer Olly Murs and others, will begin their journey later this month.

A BBC One documentary about Comic Relief’s Kenya trek will be shown in the run-up to this year’s Red Nose Day on 18 March.

Members of the team will burn an estimated 8,000 calories each day as they lead a caravan of camels carrying their camping gear and other equipment.

A Comic Relief spokeswoman said money raised would help to prevent thousands of people in Africa from going blind or contracting eye conditions.

This entry was posted in Engelske artikler. Bookmark the permalink.